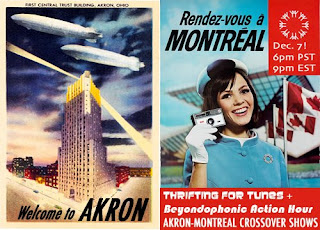 Thrifting for Tunes moves
to a much more suitable hour for cocktails!

Tothar drops in to host a segment of Thrifting for Tunes...
And the fun continues on The Beyondophonic Action Hour
with John T. taking over part of the action...
Did you know...?
* * *
SET 1: Montreal - City Songs
(airs on Thrifting for Tunes)

Song : : Have a Ball in Montreal
Artist : : The CKGM Singers
Album : : single

Thrifting for Tunes moves
to a much more suitable hour for cocktails!

NEW DAY AND TIME!
Sundays at 6 p.m. PST / 9 p.m. EST on LuxuriaMusic.com
And to celebrate the move, I've put together something special
with fellow LuxuriaMusic personality,
Tothar, host of the Beyondophonic Action Hour.
The Akron-Montreal Crossover Shows!
The Green Hornet and Kato meet the Dynamic Duo...
The Clampetts visit Petticoat Junction...
Ritchie and the Fonz double-date Laverne and Shirley...
Boss Hogg downs some chow at Mel's Diner...

And now...
John T. and Tothar team up for the Akron-Montreal Crossover Shows!!!

Proving that DJs know no borders, on Sunday, December 7th,
Thrifting for Tunes and The Beyondophonic Action Hour
come together for a two-hour affirmation of civic pride!

The municipal flag waving begins at 6 pm pacific/9 pm eastern,
as Tothar drops in to host a segment of Thrifting for Tunes (on its new day and time!)... And the fun continues on The Beyondophonic Action Hour at 7 pm pacific/10 pm eastern with John T. taking over part of the action...

Metropolitan melodies, local lunacy... and two guys expounding on the virtues of their respective hometowns!

Did you know...?
The Thrifting for Tunes-Beyondophonic Action Hour
Akron-Montreal Crossover Shows...
Sunday, December 7th, 6-8 pm pacific / 9-11 pm eastern
Plenty more coming up in December
as Thrifting for Tunes settles into its new timeslot...
* * *
Can't make the new timeslot? No problem!!!
DOWNLOAD THE PODCAST!
All LuxuriaMusic programs are now archived and available as podcasts, so they’re never more than a mouse-click away! To access any show, go to the LuxuriaMusic home page and select the “Podcasts” menu tab, then choose the show you want and use your web browser to subscribe to that show's podcast feed. The Safari browser has the option to subscribe directly to the podcast feed in iTunes!
Posted by John T. at 10:17 PM No comments: